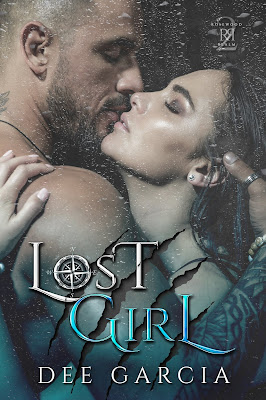 Wendy
I was just a normal girl in a normal human world. I’d loved. I’d lost. I’d grieved, and after some time, I moved on.
Then, and quite suddenly, he returned.
He—Peter Pan, my first love; a monster in disguise.
In the end, he paid the ultimate price, but his demise wasn’t enough.
Now, I’m paying off the interest, dragged into a realm filled with wicked creatures I thought only existed in fairy tales and lores.
They want answers.
And I have none to give.
But the proverbial hourglass is draining of sand, and as darkness consumes, I find myself accepting the fact I’ll never make it home.
I’ll die at their merciless hands.
That is, until one valiant creature intervenes—leader of The Lost Boys.
The Alpha.

Tavi
Finding Wendy was by sheer chance.
From the moment I saw her, I was blasted with this fierce sense of duty.
I can’t explain it.
All I knew was, I had the save her.
So I did, brought her back to the Woodlands—The Lost Boys’ stomping grounds. But her connection to Peter leaves her as ostracized as he once found himself.
Until her mortality poses a concern, one the factions can’t ignore.
One no one has answers for, either.
Both my father and the Sacred Six warn there might not be any, but that doesn’t deter Wendy from trying to find a solution.
Despite such pressing matters, though, there’s a singular thought that incessantly crosses my mind.
Proof that fate is real.
She’s mine.
And I’ll be damned if anyone—or anything—tries to rip my little wolf away from me. 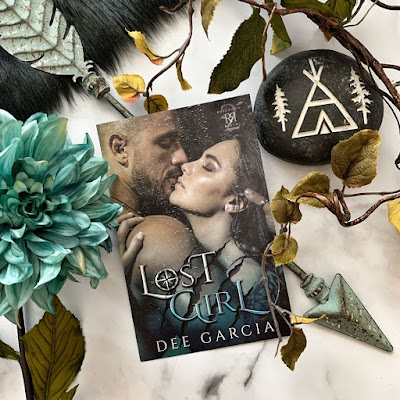 You know the feeling when you’re aware of the points you want to hit in your review, but you have no idea how to start it and and you wish you could just bare bones it and be like this is how it is, what you liked, what you didn’t, your overall feelings, etc, yet you feel like there’s no real structure to that, so you’re just stuck and tired and don’t want to think about it anymore but at the same time you don’t want to put it off because you want to get it over with since you can’t start something else until you finish this review? And when I say “you,” I obviously mean me and I’m tired and don’t care to put a nice bow on everything and I’m just going to say what I want, so here it goes.

I liked Lost Girl much more than Venom, it was without a doubt a better book. It kept me intrigued and had me glued to the pages there for quite awhile. I did not love Tavi more than Hook (Hook forever), he’s just more scrappy and less dignified than Hook and it was a little off putting for me at times, but I love him with Wendy, he’s so sweet and a total marshmallow with her. It was the complete opposites with the heroines, I loved Wendy way more than Tinksley, Wendy is just a really grounded, understanding, empathetic person — she’s the bomb. I was bummed out that there’s a mystery throughout this book that never got solved, it drives me a little crazy to think about, but I’m sure we’ll found out eventually what was going on and I will be impatiently waiting for that answer to come. That’s really all I have to say about Lost Girl other than that it was awesome and enjoyable and I can’t wait for more from this world!
~ 4.5 Stars

I’ve been meaning to read Venom ever since my friend told me how good it was and I figured that with the release of Lost Girl, now would be the perfect time to read it. I don’t think I was as enchanted with this book as my friend, but I really did enjoy it. It took awhile before I was fully on board with Tinksley, at the beginning, she was fine, I didn’t like her at all in the middle or think she was good enough for Hook because the man is amazing, but by the end, she was a boss and totally a match for Hook. Setting those two aside though, the world that Ms. Garcia has created was very interesting and it was an aspect of this book that I always loved and I’m very excited to learn more about the world of Rosewood and see more of its characters. Venom was, on the whole, an excellent read and I’m so ready for Lost Girl — bring on Tavi and Wendy!

Self-published dark romance author Dee Garcia was born and raised in Miami, Florida. A voracious fan of romance novels and long time lover of the written word, her mission is to craft unique, compelling, and deliciously dark stories that will give her readers a thrilling escape from the monotony of everyday reality. With fierce, headstrong heroines and sinful, possessive Alpha males weaved into her rousing tales, Dee hopes to leave her mark on the Indie world, one decadent plot twist at a time. 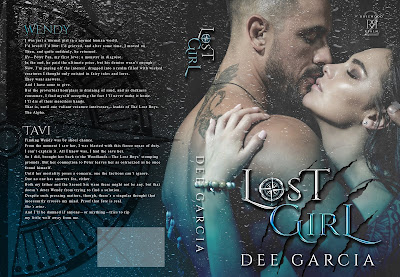 Posted by Sonja Mullings at 7:00 AM No comments:

Far, far away, hidden on Insula Sacra—Island of the Accursed— lives a forgotten world of man and beast.


Damned by the Gods, and forced to live in everlasting darkness, they continue to fight a war that has long since been buried in time.

With each rise and fall of the cursed moon, they are reminded of all they’ve lost.


Desperate for freedom, they await the night the one true king will rise to power and free them from the curse.

The King, however, cannot rise without his Queen—both blessed with the mark of the Gods, they must end the war to save them all.

Or so the legend says… 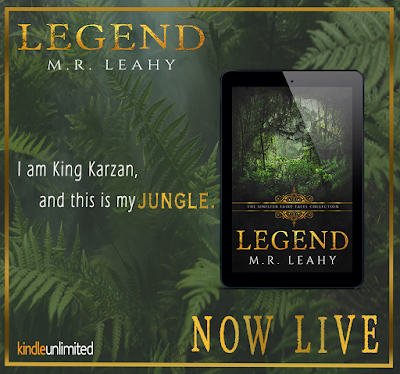 "They abandoned us, cursed us. An endless war, a dying race...the prophecy states that once united, the chosen one, bearing the mark of the gods, will bring forth the one true king.” Balling my hand into a fist, I turn and face the great room. “I will be that King. No matter what it takes, no matter how many people must burn to make it so, we will rise again and this time, not even the Gods will be able to stop us.” 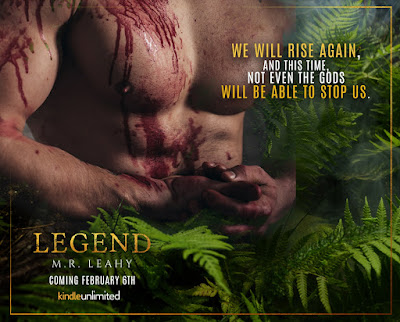 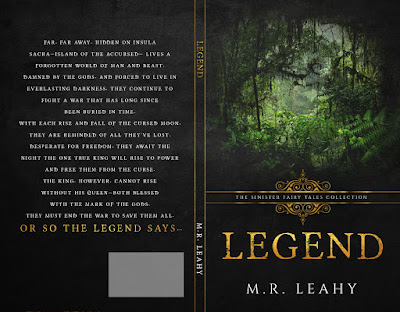 I was a little nervous to start Legend because I had a negative experience with the last book that I read in the Sinister Fairy Tales Collection and even though I knew this was by a completely different author, I was still stressed out about it. I probably would have put off reading it for awhile, but I didn’t think I had the time, I wanted to get it over with so I was done and didn’t need to dwell, and I also knew there was the possibility that I might actually like it which made it a win-win situation either way. And I did really enjoy reading Legend! It kind of had a The Planet of the Apes vibe going on, it was interesting and it moved very quickly. It did feel a little cheesy in that epic storytelling you see in certain movies way, but I truly had a great time with this book and I wouldn’t say no to picking up M.R. Leahy again!
~ 4.25 Stars
Posted by Sonja Mullings at 8:00 AM No comments: